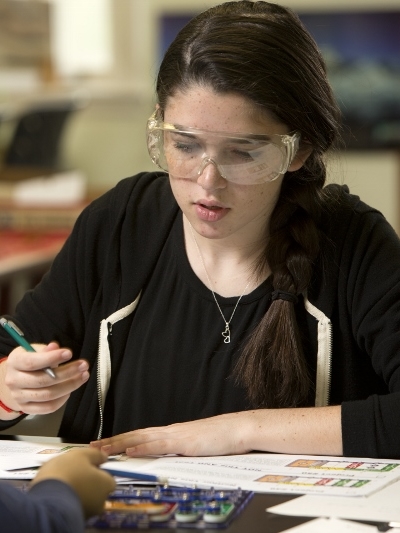 (Adapted from the National Association of Independent Schools)

Myth #2: Independent school is “not the real world.”

Fact: Of course it isn’t. And that’s a good thing. The real world is dangerous, unkind, unstructured, and very often devoid of educational and ethical content. The culture of most independent schools is surprisingly counter-cultural because they offer a positive values system to oppose the moral and intellectual toxicity of popular culture.

However, independent schools prepare students exceedingly well for the real world(s) of college, the workplace, and well-lived lives, according to the findings of the National Education Longitudinal Study from NCES. Independent school graduates earn college and graduate degrees in disproportionately large numbers, claim unusually high career satisfaction, vote more often, engage more deeply in service and volunteerism, and generally leave the “real world” far better than they found it.

Fact: Independent schools are admittedly expensive, yet not unaffordable. It’s expensive to hire and support excellent teachers, maintain small classes, offer individual counseling and advisement, sustain varied sports and arts programs and activities (and engage all students, unlike large public schools where only the most outstanding athletes and artists get the opportunity to play, create, or participate). Financial aid packages offered by independent schools can mean, for many families, that the tuition paid every year is significantly lower than the “sticker price.” Families in a wide income range receive varying degrees of support, and are thus enabled to give their children the best possible start.

Myth #5: Independent schools are for children with special needs.

Fact: In most urban areas in the United States, there are large concentrations of families who send their high-achieving, academically thriving children to independent schools. In more suburban areas and throughout the Midwest, however, there are fewer independent schools and a lingering misconception that “something is wrong” if a family places a child outside the tried-and-true local public system. While there are very good private therapeutic schools for students with learning or social difficulties (schools that serve that specific population well), all National Association of Independent School institutions are decidedly “college-prep” (including all elementary schools).

Myth #6: Independent schools are only for child prodigies.

Fact: It’s true that our graduates are well-prepared, well-polished, and well-equipped in critical and creative thinking. However, they don’t all come to us that way, and even those who do leave greatly enriched by their educational experiences. NAIS schools embrace “growth mindset” research, which indicates that success comes of hard work and optimal conditions, and that emphasizing “native intelligence” can be counter-productive. While the typical independent school student likely has average-to-above-average ability, she becomes exceptional only through hard work and opportunities to develop multiple intelligences, not just academic and intellectual ones. And while there is a segment of students with learning differences in many independent schools (and some independent schools whose mission is to specifically serve LD children), LD kids in independent schools are virtually all college-bound because they have been taught to—and how to—rise above these challenges.

Myth #7: Independent schools are disconnected from the community.

Fact: Independent schools are very invested in the idea of “community impact” and opportunities for community involvement. On a financial level, independent schools have multi-million dollar budgets, employ local citizens, and buoy the local economy. On a programmatic level, virtually every independent school’s curriculum emphasizes community service--so students and faculty contribute “sweat equity” in the local community by tutoring in schools, assisting at hospitals and nursing homes, cleaning up parks and rivers, and through many other outlets. These programs tend to have a “service learning” dimension: work in the field becomes the subject of classroom research and discussion, often instilling lifelong civic engagement. Finally, independent schools define being “part of the community” very broadly—seeking not to engage a neighborhood superficially, but to address global challenges by implementing local solutions.