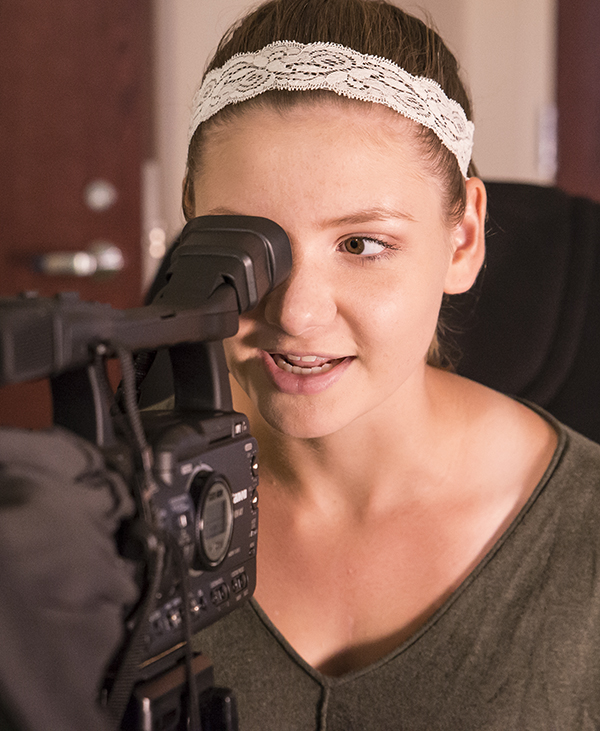 The Videography program’s objective is to teach the art and craft of filmmaking, explore the history and theory of film and video, and to provide intensive hands-on experience utilizing the latest technology in media production. The program nurtures students to discover their unique voice and provides them with the knowledge and diverse skills that are transferable to other artistic and academic disciplines. Student projects simulate the collaborative experiences found naturally in filmmaking.

Students can first take Videography in 7th grade, where they spend a single trimester learning the very basics to making a film. They work in Premier Pro and begin with a cursory understanding of how to edit a film, using music to help them understand that editing has a rhythm to it. They are given introductory lessons into Premier Pro, learning how to transition, create titles, and sort and organize their workspace

effectively. The visual projects they work on focus on framing, lighting and angles to get them in the habit of thinking about what they want their images to look like. The Middle School Videography education continues into 8th grade, where the students work on honing the skills they learned in 7th . Further, they are introduced to the world of screenwriting. They are taught the fundamental skills necessary to writing a script, and they are trained in proper screenwriting format. Finally, they work on a project that requires them to write a script, shoot said script and then edit the film, giving them the satisfaction of creating a film start to finish.

The Introduction to Videography class serves as the first step in the Upper School Videography education. Classes focus on providing the fundamental skills necessary to create a short narrative film from inception to finish. Pre-production skills including marking and scoring a script, storyboarding and creating a shot-list are taught. Production skills including using proper film grammar, understanding how to shoot in time and space, and making use of the frame in an intriguing way are explored. Students learn how to effectively sew stories together using Premier Pro. The exercises Students do in class are focused on providing time for active learning and Collaboration. Long-term projects may focus on the accumulation of ideas worked on in the past weeks surmounting to a multi-week project centered on showcasing the skills the students have developed.

Outside of production, the students begin learning film history, from the early 1800’s-1960’s, to provide them with a context for different film genres, and how the art has changed in the last century. The screenings of historical films also kick-starts the process of writing about film, as a page long written critique accompanies every film we watch in class. These critique’s lay the groundwork for a semester long film research project, where the students write a 4-5 page critique on a film they’ve chosen, then present their critique to the class. As film students, it is imperative that they not only learn how to create film, but study film as well so that those who have come before may appropriately inspire them.

Advanced Videography is the final step in the classroom based Videography curriculum. In this class, students have already been schooled in the production process, so the course centers on honing their creative vision. Advanced students do exercises almost everyday that challenge them to create films under specific constraints and timelines, allowing them to creatively problem solve the task at hand.

They are trained to create stories that show, not tell, as videography is a visual medium. The multi-week projects they create center around completing short films, and they revolve around training how to make narrative, documentary, experimental and commercial film. To further their ability to write about film, they engage with college-level theoretical film essays, and continue to write critiques on the films watched in class. They are urged to think critically about the films they watch and the readings they scour. Students are encouraged to forge an opinion on the material we study, be it negative or positive, and present their opinion with facts to support their arguments. Further, they participate in a director research project, to help them better understand the concept of the “Auteur” and what it means to be an author of film.

The final stage of the videography program is an Hilltopper independent study. Students work individually, creating their own projects over the course of the school year. Often times, they work with businesses in the Elgin community to create commercials or company overviews. This process gives them an understanding of what it’s like to work with a budget, create a film for someone else and work under

real world time constraints. The experience provides them with invaluable involvement in practical film work that serves them well should they wish to proceed with videograph in the next stages of their life.